What is Scrum? It's become one of the key buzzwords thrown around in the Software world today. Now just as a disclaimer, we're not talking about a Rugby Scrum, but interestingly that's where the name comes from. We are talking about a software development framework which is a subset of Agile.

So before we discuss Scrum, lets figure out what Agile is.

Now we can go back to the ideas behind Scrum. Scrum is one of the most commonly practiced frameworks for an organization to implement Agile Development. The philosophy behind Scrum is to create a consistent feedback loop on the progress of an application between stakeholders and developers. Which in turn, helps  a development team more easily adapt to changes in needs and wants of the stakeholders, as they can ensure that each iteration of the application is up to the standards required. A key highlight to take away from this idea is that making changes to an application are much easier as you are working in iterations, as opposed to a traditional waterfall strategy where stakeholders really only get to provide feedback once the entire application is developed, which makes it much harder for a developer to go back and make the necessary changes.

In Scrum, the feedback loops are created through the process of creating Milestones, known as "Sprints" in Scrum. These sprints are consistent time frames (generally 2-4 weeks long) that a potentially shippable product must be created by the Scrum team. At the end of each sprint, key stakeholders and team members gather for a demo of the product to analyze the changes that need to be made.

The three key roles in a Scrum process are the Product Owner, Scrum Master and Scrum Team. 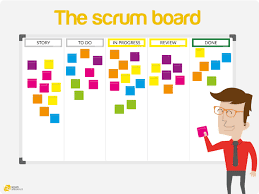 Scrum basically allows development teams to be more "Agile" and easily react and enact necessary changes. These principles allow teams to save time and money, and get an application to market faster.